The Smell of Chlorine

WordPress does a nice job of monitoring what terms people enter at search engines that subsequently direct them to our blogs. It turns out that many of the searches that lead people to HalfAwake are along the lines of “how can I swim without water going up my nose”. These keywords are being directed here via my “Sink or Swim” post, where I discuss my own fear of water going up my nose, and my eventual acceptance that there’s not much you can do about it. 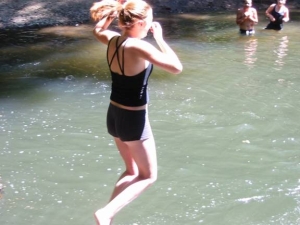 I’d like to elaborate on this issue a bit. First of all, as far as your ability to continue living is concerned, water going up your nose is not a serious problem unless it goes up so far that you begin to inhale it. My friend from highschool Earl could string a wet noodle into his nostril and back out of his mouth and then use it to floss his tonsils, and he seems to be OK. I don’t know anything about the physiology of the nose, but I think it’s a generally sensitive area, and that is probably why getting water up there is uncomfortable for most people (probably not Earl though). Furthermore, if you are panicked or nervous when the water does enter your nose, I think you are more likely to actievely pull it into your lungs. As I said in my previous post, getting water up my nose got less bothersome for me once I put myself through it many times. The water still goes in there, it just doesn’t make me want to call for the lifeguard anymore.

That being said, you can take steps to help prevent water from entering your nose. Here are the things that I have empirically found to help:

Let me reiterate again that I’m a terrible swimmer and certainly not a doctor of any sort. If water going into your nose makes you cough or have trouble breathing, then don’t push yourself. I’m only suggesting that water going part-way up the nostril isn’t always as bad as you may fear, and you might be able to learn to manage it better.

Author’s Note: I just saw that one search for “water up nose pain excruciating” led someone to my blog. Please, if water going into your nose is causing any pain, let alone excruciating pain, see a doctor.

← Chore Wars
So Close to Fame →

2 responses to “The Smell of Chlorine”