The Uncle of All Bombs

Lower cover text reads: “Sex is the the most lethal weapon”

As I Lay Me Down to Sleep

Last night as I tried to force myself to sleep, I found myself worrying a lot about the daily hustle. My mind jumped randomly around to work, roommate issues, loneliness, my lack of a life-plan, and other personal ‘problems’. I’ve been doing this for a while now, but what started out as an efficient way to plan and prepare for the next day as I went to bed has become a stressful nuisance.

So last night I tried something new. I tried thinking about other people’s problems. Specifically, I thought about the ~1 million people displaced by the San Diego Wildfires. I thought about the horrified families, the danger to the first responders, and the destroyed homes.

… And I couldn’t do it. For every new stream of consciousness I started, my mind quickly drifted back to my own life in less than a minute. I just could not maintain my focus on something foreign.

I would have liked this post to be about the transformative power of selfless prayer, but I seem to have trained myself to reflect only on myself as I fall asleep.

Posted by halfawake on October 24, 2007 in Garbage In, Garbage Out

You Were, You Are… 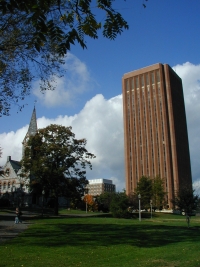 It’s homecoming weekend at my alma mater, and I came back to visit for a 5-year departmental reunion.

Television and movies have taught me that reunions are awkward, high-pressure situations that are toxic for those of us with flexible self-esteem levels. These gatherings are supposed to be a sort of pissing contest, except not the kind where you see who can piss the farthest. Rather, in this version, you try to actually piss on the people around you.

Things (thankfully?) did not turn out as I was expecting. Everyone was generally nice and I didn’t feel any pressure to impress. Anyone who had gone to industry after college greeted you with a hearty handshake and a business card, while everyone who had gone to grad school gave you a bittersweet smile while promising/lying that they are “almost” done. What caught me off guard was the inundation of college-memories that hit me as soon as I got near campus. Walking around I saw my friends, roommates, professors, and past-loves everywhere. I saw myself, running ragged from class to class. Every place had a memory associated with it – “This is where we built a gigantic snowman that some jerks knocked over with their truck… Oh look! It’s that big rock I always used to fall asleep on! Isn’t that the steam vent that my drunk friend burned half his face off at?! Cool!”. Campus was spectacular – we hit he prime of fall foliage changeover, and the scenery was pristine. I spent four hours just visiting my old hang outs and reliving the past.

It was overwhelming. I actually lost my breath walking back to my frosh/soph dormitory just from the rush of memories. Or maybe it was the huge hill.

Our alumni association likes to remind us that we are always a part of this college. But what hit me most was how much I’m NOT a part of it anymore. No matter how much I may want it, those days are gone forever. At the same time I realize that I may be putting college on a pedestal because I’m currently in an extremely disgruntled, and sometimes cut-throat, work environment. Rather than worry about the pissing contest I might go back to someday, maybe I should think about whether I’m in one right now?

But that’s too cynical for me. I loved college, and I love where I am now too, just differently. Instead of focusing on how one spot may or may not be better for me, I’ll leave with a renewed sense of pride and happiness in my roots. Go UMass!

Posted by halfawake on October 21, 2007 in Garbage In, Garbage Out

After a week of exercises, my ankle feels significantly better. The pain and swelling has been mostly replaced by a constant soreness, and my focus is now on rehabbing it properly to prevent re-injury. Yesterday I went for a short 16 minute jog on a flat paved trail near my house. My left ankle was noticeably weak, but it was great to be sucking wind and moving a bit.

My one complaint is that there’s something wrong with my achilles or heel area. The physical therapist said that I might have injured the spot where the achilles connects to the heel. This causes pain in the heel and bottom of the foot when I extend my ankle fully, particularly if it’s bearing weight (e.g. calf raises). There seem to be a number of possible causes for this type of pain, but for now I think the only thing I can do is strengthen the area, stretch it out, and take it slow.

My offhand comment about the Dead Alewives “Dungeons and Dragons” skit reminded me of the second Dead Alewives D&D skit. Googling around for it revealed “Dungeon and Dragons: Trials of Devotion“. This live-action reenactment of the second skit drags on for a bit in the introduction, but the actors have the script down near perfectly. Being able to watch the DM (“Grahm”) blow up at the players (rather than just listening to it) gives a great new perspective on an old meme. The full video is linked below.

Posted by halfawake on October 8, 2007 in Entertainment

It’s a Game of the Imagination

I took a spontaneous walk to the local comics store with Bads last night. The clerk Owen chatted us up for a while, and at some point the subject of “Magic: The Gathering” came up (I can’t remember how). Bads lit up at this, looked at me, and said “we should play Magic!”. I was caught a bit off guard here. Bads is the only friend I have in town who plays video games regularly, but I had no idea he was into Magic.

Truth be told, I’m not even really into Magic. I took it up for a year in high school, spending around $50 on it in all before I realized that I could not compete with friends who were spending hundreds, sometimes even thousands, of dollars on their card collections. At this point I don’t even know what happened to the cards I bought.

So we went back to Bads’s house, and played four games with his cards. Bads swept me four to zero – it was high school all over again.

And every time I played a spell card, I couldn’t resist the temptation of saying “I cast…. magic missile” in reference to this old Dead Alewives skit (flash version). (Note: the mp3 link at killermookie.org will open in Firefox on my windows computers, but not IE).

Posted by halfawake on October 6, 2007 in Entertainment

Like I mentioned earlier this week, I recently suffered an ankle sprain that has prevented me from running for almost two weeks now. At the recommendation of Tony and another friend, I made a trip to physical therapy this morning. It turns out that there is a new local law that allows patients to refer themselves to a physical therapist rather than going through a primary care physician, which allowed me to get an appointment rather quickly.

The ankle itself has healed quite a bit since Monday. My foot is still slightly bruised, and I get a twinge of pain occasionally when I take a bad step or put my shoe on too fast. The biggest problem is that it’s still swelling up some whenever I walk around too much, which gives the feeling that my whole foot is numb. I explained my symptoms to the therapist, who did a series of measurements comparing the flexibility and size of one of my ankles to the other. The range of motion of my injured ankle was down by as much as 30% in certain directions (that’s my estimate based on looking over her shoulder at the measurements). This isn’t terrible, considering that my “good” ankle is actually very flexible, but it helps establish a goal for the rehabilitation process.

She also felt my ankles up for a while to see where the sore spots were, and decided that I had stretched the posterior talofibular ligament. There are three ankle ligaments, shown in blue in the picture, and she proposed that the reason I was bruising more with this injury was that either I had never torn this particular ligament in previous ankle injuries, or I had reopened some scar tissue from previous injuries.

A lot of this is guesswork, but I feel like physical therapy is somehow more codified than, say, evaluating an ear, nose, or throat infection. The therapist prescribed an aggressive set of exercises, along with some biking and perhaps water running, and I’m going to go back in a week.

Posted by halfawake on October 5, 2007 in No Easy Days

They Might Be Giants just released a video for “The Mesopotamians”, a song from their album “The Else”. I was a little surprised to see a TMBG video that had a clear connection to the lyrics of the song. The art on this one is pretty neat. Check it out.

Posted by halfawake on October 4, 2007 in Entertainment

Tags: The Else, tmbg

When I was living at altitude in New Mexico this summer, I would often joke that as soon as I got back to sea-level I’d run a 5K, set my ‘post-high-school’ personal record, and then retire from running forever.

I guess I should be careful what I wish for.

The week I returned, I had an allergic reaction to the dog that my roommate Phoebe rescued over the summer. Suffering an asthma attack is not the ideal way to start a cross country season, but I got on my inhalers, and once the dog was made to live outside I started feeling better. Luckily, this wasn’t the precipitous end to my running career that it could have been.

My first race back home was a nice 3 miler on a flat and fast XC course on mowed fields and some trails. I ran it in 18:16, much better than anything I’ve done since high school. It wasn’t easy, but it showed that I was in good racing shape. The following Monday I decided to go for an easy nighttime recovery run. About 1 mile into it, BAM!, I twisted my ankle on a stray piece of wood and hit the sidewalk like a wet bag of groceries. After rolling around on the ground for five minutes I stood up and began the long, awkward, and excruciating hobble back to my house. (N.B. – If you ever happen to drive by someone dressed in running clothes who is limping alongside the road clutching their leg in agony, consider slowing down to ask them if they need help).

It’s been a week since that run. After 4 days of Rest, Ice, Compression, and Elevation, the swelling reduced, but left in its wake some nasty bruises. Now it’s still bruised, and I can’t move the ankle through its range of motion without pain. This is the worst ankle injury I’ve had in years, and it stinks to be taking so much time off at the beginning of cross country. I feel like everything I worked for training over the summer is gone… Is it?

Posted by halfawake on October 1, 2007 in No Easy Days