Here are a couple of the photos from the breakfast I mentioned. 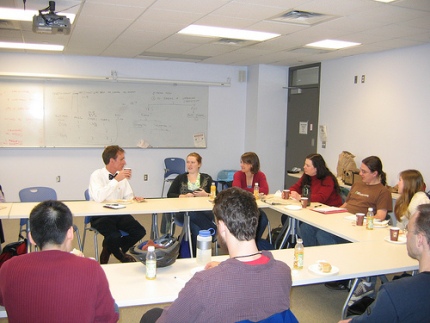 More recently, our class had a media training workshop where we practiced constructing clear messages, using sound bites, and performing camera interviews. It’s sort of terrifying to be on camera speaking as an ‘expert’ about something that in reality you don’t feel that confident about.

We watched a number of examples of good and bad interviews. One excellent example of what not to do came from an interview of Bob Dole by Katie Couric during the 1996 presidential election (sorry, I can’t find a video of it). Dole was downright combative rather than focusing on the issues that were important to him. But it’s tough. I’d probably blow up at a reporter who accused me of anything, too.

I think I could do a good job as the journalist too, though. I like asking questions and being critical of the responses (in a constructive way, of course). I like listening. Maybe there’s a career in sci-comm or policy for me after all.

Posted by halfawake on April 4, 2008 in Alchemy, Photos